Fineman was contacted by Nordisk Film a Danish film company, who asked for a system that could display advertisements 24 hours a day in Kastrup Airport, in a high quality.

The task was to deliver a Multi Output Signage Player for Kastrup Airport that could display advertisements 24 hours a day in a 4k resolution.
A 4k resolution is easy to achieve on the television at home, but on a video wall that consists of 16 screens, it is not quite as easy, but we accepted the exciting challenge.

The week after, we arrived in Kastrup airport with a IBASE Signage Player which we believed could run ads in a 4k resolution.
However, it turned out that the content had a considerably higher quality than usual 4K, and the result was therefore not entirely satisfactory.
Therefore, we had to continue the development of a solution that was significantly stronger in order to provide a 4k resolution of the desired quality.
We brought a new version of the player to Kastrup airport the following week, where it was tested for a month and then approved.

The system also has another important function, besides running advertisements 24 hours a day in a 4k resolution. In the video walls are implemented a system, also provided by Fineman A/S, which can define the people who look at the advertisements.
These people are not defined in terms of monitoring or pictures, but only from calculations of their faces. This means that the definition of the target audience is anonymous, and you cannot use the system to identify persons or obtain personal information about them.
By contrast, you can use the system to get a glimpse of who your audience is, the system calculates who sees the ads, based on demographic variables such as age and gender.
After a while you can, based on these calculations, get a clearer insight into who is viewing ads, for how long and at what times. This information can be used to target the advertisements for the right segment, and you can thereby ensure that you expose the right audience for your message. 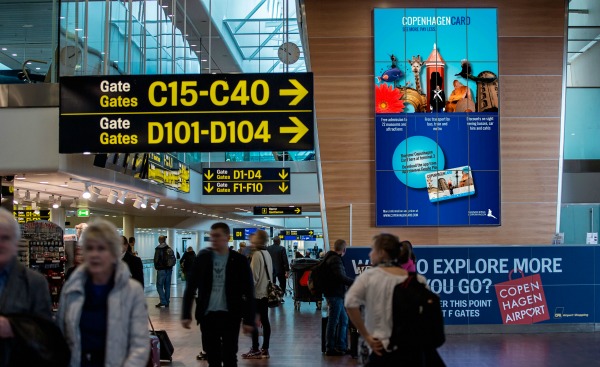 The solution Fineman delivered to Kastrup Airport, in cooperation with Nordisk film, has been received with great satisfaction, and is an example of a custom-made solution that has been delivered on the basis of the customer’s wishes and requirements.
The cooperation between Fineman and Nordisk Film was also very successful, and Jan Rasmussen, team leader for Cinema Tech in Nordisk Film, has after the cooperation stated:

He adds:
“It was important for us to have a partner who was technically strong, and who was willing to adapt their products to our needs and be a partner in the development of the technical solution to the airport. The cooperation worked better than expected with Fineman”

> Information about opportunities for advertising in CPH.